High school students throughout the state of Washington have a unique opportunity to participate in the Washington State Nashville Country Star (WNCS) singing competition and through that experience gain confidence and, as a bonus, qualify for prize money.

The WNCS singing competition, founded by Ed Lisenbey, formerly of Okanogan, began its 13th year in January. The winner of the competition is awarded a cash prize of $1,500 and other finalists can earn cash awards as well.

The contest is open to any student enrolled in any Washington state high school, including home-schooled students in grades nine to 12.

Gig Harbor High School student April Lawson was convinced to try out during WNCS’s spring singing contest after seeing changes in fellow singer Arthur Keast, according to her mother, Danielle.

“Seeing the difference in Arthur convinced April to try out. Since then she has learned stage presence, execution of lyrics, musicality and has gained such confidence in this ability,” she said.

Rumi Keast, Arthur’s mother, said his participation in the contests has been extremely positive.

“Arthur has been inspired and motivated by his fellow contestants with great stage presence,” Keast said.

A lot of the credit for GHHS students excelling in their music ability goes to Wayne Lackman, who teaches choral music at GHHS, and Allison Ellis of Peninsula High School.

“I work with such talented students. They make me look good,” said Lackman, who also heads up the Gig Harbor High School Meistersingers choir.

Lackman and the students perform throughout the community on a regular basis.

“What is so cool is we go out in the community and perform and unless you have a connection to a teenager, you believe (negative stories about teens) you read in the paper,” he said. “They are just excellent kids and it gives me faith in the future. You know the future will be in good hands.”

The public will have a unique opportunity to hear talented high school students perform in the Stellar High School Singers Show at 7 p.m. Friday (Nov. 17) at Chapel Hill Presbyterian Church, 7700 Skansie Avenue. Tickets are $8 and can be purchased at the door.

WNCS contacts 350 high schools in Washington state and travels long distances to conduct rounds of auditions with millions of tedious tasks associated with the contest.

“Getting opportunities to sing with these excellent high school singers on the same stage is the result of their enormous efforts,” she said.

Through this experience, Arthur has learned more about genres of music and has become a real fan of the oldies.

Arthur competed in the WNCS contest during his sophomore year.

“It boosted my confidence because you have to perform in front of people, and I wasn’t used to that,” he said.

Gig Harbor High students Paige Lawson, Moomaw and Keast each received a finalist award in 2017, and April Lawson was awarded the spirit award in the semifinals.

No school has had four award winners since Washington Nashville became a statewide contest in 2010, Rumi said.

For his part, Lackman says the singers are incredibly talented.

“They are just really good people. These are the type of people I would love to have my kids hang out with,” he said. “There are days I can’t believe I get paid for what I do.”

Washington Nashville has awarded more than $74,000 to student singers to date.

More information about Washington Nashville Country Star can be found at

Jaimee Keenan from Curlew is another fan favorite. Jaimee has a lot of spunk &  a great personality. Her stage presence is spot on! Jaimee was in our competition for three years & won the Championship is 2016. After graduation, Jaimee headed to Nashville, TN in September or October. She is currently working at the Grand Ole Opry.

Dakota Neuman participated in Washington State Nashville Country Star his senior year & won the 2015 Championship. Dakota has a great personality & loves to sing. Dakota has written & recorded some of his original songs. Dakota is currently living in Hendersonville, Tennessee near Nashville. He has two jobs, one of which is at the Grand Ole Opry! He's living his dream & we wish him the very best!  Dakota will open for Colin Ray in May  He will also open for him at a show in late August..   http://www.dakotaneuman.com/
In Maile's senior year of high school she competed in the Washington State Nashville Country Star competition and took second place. Since then, she has always stayed involved by volunteering and sharing her talent to help raise money for our program. Maile Mae believes all kids who have the passion for music should have the opportunity to perform. Maile & her band are busy performing all over the State of Washington. Read more about her at her Facebook music page. 2018 Maile will be taking a trip to Nashville soon...let's hope her paths cross with the right people!
Maile Mae
Audre Belt  - American Honey band are located in the Yakima area, but play wherever their gigs take them. Audre has been a great supporter of Washington State Nashville Country Star since she was in the competition. She is a fan favorite & we love having her host & guest sing at our competitions & fundraisers. We wish the best for Audre & the American Honey band!
2018  Audre is as busy as ever. She plays somewhere almost ever night with the band. She also has opened her own salon in Yakima: salonbeyoutifulyakima.com
https://www.facebook.com/americanhoneytheband/
www.americanhoneytheband.com

In May of 2013, seven out of ten contestants who sang at the Texaco Country Showdown, in Wenatchee, during Apple Blossom were past & current contestants from our competition! Audre Belt, Drew Jaeger, Charlie Green, Maribeth Briskey, Samantha Culp, Allie Burgett. Jessica Jacoy & Jimmy Charles also tried out at other venues in the State. 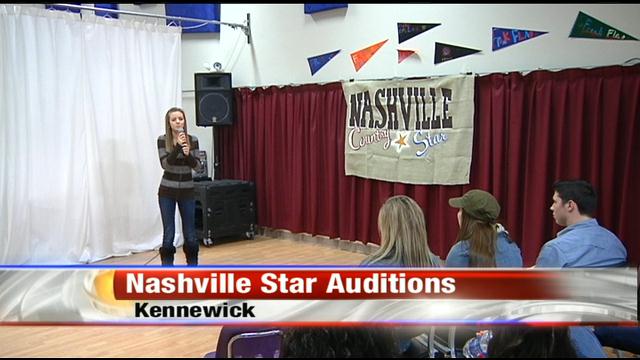 KENNEWICK, Wash.-- Aspiring singers auditioned Saturday at the Kennewick Boys and Girls Club for their chance at joining the The Washington State Nashville Star Competition.

Contestants sang a country song for the judges panel.

The competition is open to high school students and organizers say every year around 250 teens try out.

"It's a varied response from the kids but for some of them it's a life changing experience. You can see their confidence grow not only with performing," said Ed Lisenbey, Washington State Nashville Star Competition creator.

Fifteen contestants will perform at the finals on March 30th at the Omak Performing Arts Center.

The mother of a past contestant sent us an AWESOME email today. Chase Hubbard was a contestant in 2006, our second year & before we opened our competition to the whole state. Chase, as he is being called in the "business" has signed a three CD album record deal. Check out Chase's site for his single download & more! He also has a Facebook page, so look him up!! Congratulations Chase!! http://www.chasecountry.com/
Chase Country
www.chasecountry.com
Official Chase website. Chase is a country singer/songwriter. Debut album was released in March 2013. Follow his journey, see photos and read more about his life. **Chase had a very busy summer touring all over the Pacific Northwest & beyond!! WAY TO GO CHASE - WE ARE VERY HAPPY FOR YOU!!

If you have questions, or need to send a contestant sign-up sheet, send it to the e-mail address below someone will get back to you as soon as possible.

THE WASHINGTON STATE NASHVILLE COUNTRY STAR PROGRAM IS A NON-PROFIT ORGANIZATION UNDER THE AUTHORITY OF THE OMAK PAC, AND NOT AFFILIATED WITH THE FORMER NBC OR USA TELEVISION NETWORK SERIES "NASHVILLE STAR." ORGANIZERS RESERVE THE RIGHT TO ADD OR ADVANCE ANY CONTESTANT DUE TO HARDSHIP OR ANY EXTENUATING CIRCUMSTANCES. WE ALSO RESERVE THE RIGHT TO REMOVE ANY CONTESTANT DUE TO LACK OF COOPERATION OR BEHAVIOR ISSUES. WE RESERVE THE RIGHT TO USE ANY PHOTOGRAPHS &/OR VIDEOS TAKEN FOR ADVERTISING & PROMOTIONAL USE. COPYRIGHT © 2005-2020 WASHINGTON STATE NASHVILLE COUNTRY STAR. ALL RIGHTS RESERVED.   TERMS OF USE | PRIVACY POLICY